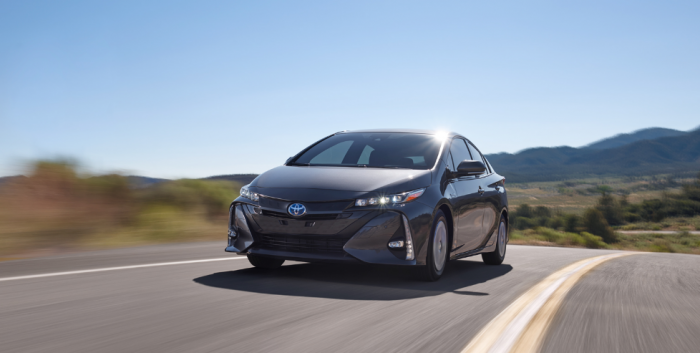 The Toyota Prius is the 2013 Best Hatchback for Families because it has the best combination of quality, size and family-friendly features in its class. Reviewers say its high fuel economy ratings, spacious trunk and roomy interior will appeal to shoppers who want to save gas and need a versatile hatchback.

The 2013 Toyota Prius has a four-cylinder engine and electric motor that combine to make 134 horsepower. This powertrain is mated to a continuously variable transmission (CVT). The Prius’ fuel economy estimates of 51/48 mpg city/highway are outstanding for the class. Since the Prius’ mission is to conserve fuel, test drivers don’t expect it to be engaging behind the wheel. They say it has numb steering, a floaty suspension, spongy brakes and hesitates from a stop, but they do think the Prius delivers a comfortable ride. The Prius also has one of the highest reliability ratings in its class.

nside, auto critics are impressed with the amount of cargo space and back-seat passenger room. Most reviewers think the Prius’ seats are comfortable. The 2013 Toyota Prius wins some test drivers over with materials they consider upscale, while others think some of the plastics aren’t up to class standards. Standard features include Bluetooth, USB and auxiliary audio inputs, push-button start, Smart Key and seven airbags. The 2013 Prius can be equipped with features like navigation, a backup camera, a head-up display, a touch-screen infotainment system, satellite radio, HD Radio, an upgraded JBL sound system and a moonroof with solar panels that power the ventilation system. Although most reviewers report that the audio and climate controls are intuitive, one thinks the navigation system is confusing and hard to see. Other auto critics dislike the Prius’ digital gauges and displays because they think they’re distracting and difficult to read, especially with sunglasses on. Available safety features include lane keep assist, a pre-collision system, dynamic radar cruise control and Safety Connect, which includes automatic collision notification, stolen vehicle locator, an emergency SOS button and roadside assistance.

The 2013 Toyota Prius is available four trim levels: Two, Three, Four and Five. The Prius is powered by a four-cylinder engine and electric motor that are paired to a continuously variable transmission (CVT). The Prius Plug-in, larger Prius V and smaller Prius c are reviewed separately. The Prius was last redesigned for the 2010 model year. Since it hasn’t changed much since then, this overview uses applicable research and reviews from 2010, 2011 and 2012, as well as 2013.